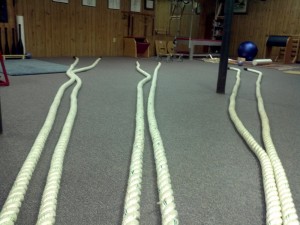 The Battling Ropes system is unlike any other training methods due to the non-momentum effect. For example, with other methods such as barbells, dumbbells and kettlebells, gravity takes over as the weight goes back towards the ground. During this time when gravity takes over, momentum is used which gives the body and mind a chance to relax. With the Battling Ropes training velocity is used and must be maintained throught the training. This forces the user to train or compete at a higher level of intensity which will last longer durations of time.

The system was created by John Brookfield who was using and developing the system for his own needs. John basically created the foundation of the Battling Ropes from the concept of a hurricane where the constant flow of the waves gave him the idea to create a series of waves with the ropes.

The first concept is maintaining velocity which is the sustaining of the waves with the ropes. The second concept is the strength endurance phase which is the Pole System training.

"The key to their effectiveness is that they work each arm independently, eliminating strength imbalances as they sculpt your muscle," says John Brookfield, creator of the original battling-ropes system. They also provide a killer cardio workout.

TRAINING RULE 1: Move in Many Directions
Don't just wave the ropes up and down. "Try different motions to work different muscles and skills," says Brookfield. Going from side to side, for example, places more emphasis on your hips and core, building total-body stability. Moving the ropes in circles improves shoulder mobility and range of motion, boosting athleticism and reducing your risk of injury. Switching among different motions in your training sessions will help you sculpt functional real-world strength.

TRAINING RULE 2: Use Ropes for Everything
"Ropes also make for a great workout in and of themselves," Brookfield says. You might do each exercise on this page for 10 minutes, for example, or do waves alone for a full 20 minutes. "Doing one task for extended periods teaches your mind to focus and helps your body flush lactic acid." It also extends the time your muscles are under tension, helping you build strength as you shed fat.

Over head circle (half circles up down)

Press into Crucifix (military press to crucifix to butterfly pec in

Keep flow, constant movement, constant output,  wrap over top ½, 1, 2 3, for resistance, can do ladders with wraps,

Backward pull on side 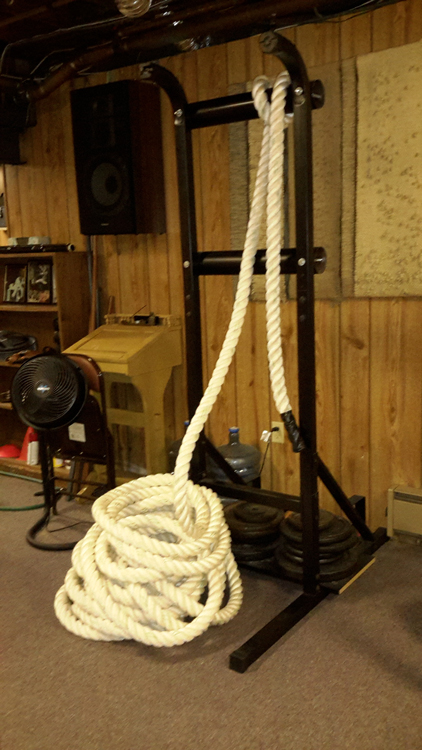