An exercise ball, also known as a Swiss Ball, is a ball constructed of soft elastic with a diameter of approximately 35 to 85 centimeters (14 to 34 inches) and filled with air. The air pressure is changed by removing a valve stem and either filling with air or letting the ball deflate. It is most often used in physical therapy, athletic training and exercise. It can also be used for weight training. The ball, while often referred to as a Swiss ball, is also known by a number of different names, including balance ball, birth ball, body ball, ball, fitness ball, gym ball, gymnastic ball, physioball, pilates ball, Pezzi ball, sports ball, stability ball, Swedish ball, therapy ball, or yoga ball.

The physical object known as a "Swiss Ball" was developed in 1963 by Aquilino Cosani, an Italian plastics manufacturer. He perfected a process for moulding large puncture-resistant plastic balls. Those balls, then known as "Pezzi balls", were first used in treatment programs for newborns and infants by Mary Quinton, a British physiotherapist working in Switzerland. Later, Dr. Susanne Klein-Vogelbach, the director at the Physical Therapy School in Basel, Switzerland, integrated the use of ball exercise as physical therapy for neuro-developmental treatment. Based on the concept of "functional kinetics", Klein-Vogelbach advocated the use of ball techniques to treat adults with orthopedic or medical problems. The term "Swiss Ball" was used when American physical therapists began to use those techniques in North America after witnessing their benefits in Switzerland. From their development as physical therapy in a clinical setting, those exercises are now used in athletic training,  as part of a general fitness routine and incorporation in alternative exercises such as yoga and Pilates.

A primary benefit of exercising with an exercise ball as opposed to exercising directly on a hard flat surface is that the body responds to the instability of the ball to remain balanced, engaging many more muscles. Those muscles become stronger over time to keep balance. Most frequently, the core body muscles — the abdominal muscles and back muscles — are the focus of exercise ball fitness programs. 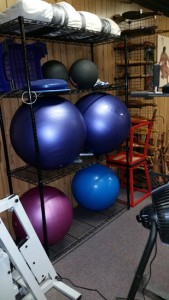